The beloved nap time…how do I get my breastfed attached at the hip and boob baby to take longer naps?

**An extended version of this article is in my new book titled, “Boobin’ All Day…Boobin’ All Night. A Gentle Approach To Sleep For Breastfeeding Mothers”. Please CLICK HERE to order! 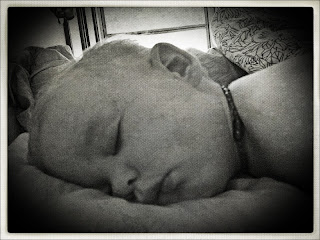 Recently my seven month old decided he did not want to nap for longer than thirty minutes. He would look like this picture, so peaceful and dreamy. And then he would wake up. He would wake up either a. happy as could be or b. upset and wanting to breastfeed but after breastfeeding would be wide awake and happy.
I either a. cried or b. vented to my husband each night about the complete and total exhaustion I was feeling because of it.  He would then sleep in 30 to ninety minute chunks at night.
READ: I WAS NOT GETTING MORE THAN ONE AND A HALF HOURS OF UNINTERRUPTED SLEEP FOR TWO WEEKS STRAIGHT!
Here is an illustration I drew of how I was feeling during this time…as you can see I’m an awesome artist. 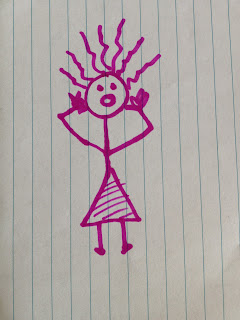 I was also getting ready to have eight people over for Christmas Day.  This is how I felt on Christmas Day from lack of sleep… 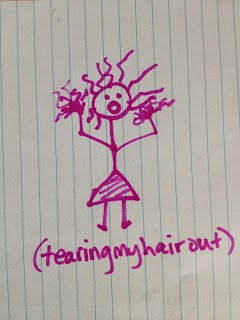 When the first lot of relatives arrived for Christmas lunch I was still in my pj’s and had not showered yet!
Now I am thankfully back to normal as he has decided to start napping again! Yay for me!
We are all looking for that magical answer….how do I get my baby to nap longer during the day?  Here is the magical answer….I actually have no idea what the magical answer is! But I do have some tips that have worked for me at various times with various babies to get them to nap longer.  Does it always work, no.  But sometimes it does! Then I rejoice and have some peace and quiet during the day for a bit longer to do all of those exciting things us mums and dads at home get to do…laundry, cooking, cleaning and occasionally getting to sit down and eat, instead of standing at the counter.
1.  First and foremost breastfeed your baby back to sleep if they wake up after a short nap.  With my eldest boy I would lie down with him on my bed just as he would start to stir or cry.  This way he would just barely wake up before I could quickly breastfeed him back to sleep.  This works great if they really don’t want to be awake yet. Sometimes he would then fall back asleep for another hour or two!
2. Routine, routine, routine!  I remember asking my paediatrician about naps when I was a new mum.  “What is normal?” I asked him.  He simply said, “it’s totally up to the parents whether or not babies and kids take naps.”  I didn’t really get it at the time but three kids later I can see what he means.  If you put in very clear routines into your child’s day then they will fall into that routine easily and be more likely to nap and stay asleep.  With the first it’s easier.  By the time number 2 and 3 come along it can get more difficult as I’m driving around like a crazy woman here and there throughout the day! Some days he has his nap in the car or being carried around in the baby carrier.
3.  Sometimes your baby’s nap will happen when they have a long breastfeed.  Even though many of us (myself included) would prefer to have some time during the day by ourselves without a little creature attached to us, sometimes this just doesn’t happen and it’s totally normal to have those days when they will only sleep while breastfeeding or being held.  For more on this topic check out my previous post on fussy babies: Cranky Baby
4. Keep this mantra in your head, “Once I reach my breaking point my baby will change and all will be peaceful again!”  My mum told me this one and boy is it true.  At times your baby/toddler/child will bring you to the point of insanity (see above illustration) and you will think, “I can’t do this anymore! I must sleep! My child must sleep!” They stop taking short naps and all of a sudden start marathon naps and night sleeps.  This just recently happened to me.  I am happy to report that for the past five days my little cherub suddenly decided to take amazingly long daytime naps and sleep in 3-4 hour chunks at night! Hooray! Hooray! Hooray!  This is how I feel now… 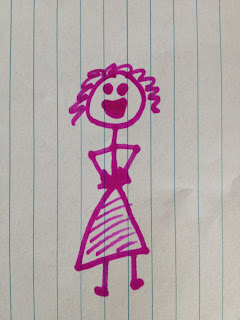 5.  Remind yourself that babies have these variations in daytime (and nighttime) sleep for many different reasons.  After those two crazy weeks I realised that he was getting another tooth! The poor thing was in pain and probably as exhausted as me.  I feel great though knowing that during this time I breastfed him, cuddled him and slept by his side as he needed it.  Other times I realised after the fact that he was getting sick.  Also, sometimes babies will change their sleep patterns when they are going through a developmental milestone such as learning to roll over or crawl. Regardless of the reason, it’s just about being there for our babies 🙂

6. Often my baby will not go down for a nap unless I carry him around in my baby carrier.  He will fall asleep in the carrier and then go through this little routine to get him to finally nap…

**If you feel as though your baby is having sleep issues or you are experiencing sleep challenges because of frequent breastfeeding, please contact me. I am available for consultations in person if you live on the Sunshine Coast or Brisbane. I am also available via Skype if you are located elsewhere around the world. CONTACT ME to schedule an appointment.

**An extended version of this article is in my new book titled, “Boobin’ All Day…Boobin’ All Night. A Gentle Approach To Sleep For Breastfeeding Mothers”. Please CLICK HERE to order!
Meg Nagle2019-01-24T13:06:38+10:00January 1st, 2013|Attachment Parenting, Sleep Challenges, Tips to Settle Your Baby|0 Comments

Why is my friend’s baby sleeping and on a schedule and mine isn’t?!

Why is my friend’s baby sleeping and on a schedule and mine isn’t?!

No. You don’t have to leave your child alone and crying to go to sleep.

No. You don’t have to leave your child alone and crying to go to sleep.

My baby breastfeeds to sleep…how will I ever be able to leave them?

My baby breastfeeds to sleep…how will I ever be able to leave them?

Welcome to The Milk Meg Shop For your convenience, I accept payment via Paypal. If you have any questions prior to purchasing, please email me at info@themilkmeg.com