Forget the cereal, have a chunk of kangaroo! 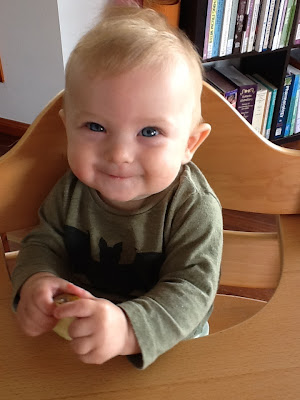 This is my little cutie eating a piece of apple at six months old.  Well, not exactly eating it but he did manage to hold it and suck on it for awhile.  Where is the spoon and rice cereal? Where is my hand shovelling the gruel into his mouth? Baby led weaning (BLW) is a term some of you might be familiar with.  It is the idea that babies are very capable of eating things on their own (this becomes very obvious when they start to reach for things and put them in their mouths). It actually might make more sense for them to eat pieces of food themselves and explore it themselves rather than us shovelling things into them without even knowing if it’s what they want!

With our first boy (poor first born children really are experiments aren’t they?) we did what most everyone did in the States, we fed him baby food out of a jar.  And guess what? He hated it!  He absolutely hated it.  We of course tried everything, doing the “airplane” and trying to get him excited about it by laughing and smiling ourselves looking like total idiots attempting to get a bit of food into his little mouth.  Why did we do this to him?! Looking back it seems crazy now but that’s just what you do as a new parent.  After a few attempts at getting him to eat mushy peas, I finally gave up and didn’t try again until he was nine months old.  I just continued to breastfeed him and he was as happy as could be. At nine months he was ready for food and happily ate it.

Anyway, now with our youngest we have started doing baby led weaning and I have to tell you it’s not only EASY, EASY, EASY but it makes SO much sense!  No baby blenders! No freezing little bits of mashed up food in an ice cube tray! We literally just give him a piece of food off our plate (not a piece of brie cheese on a cracker with chutney of course) but something simple like a veggie or piece of fruit.  We put it on his tray and watch with amusement as he tried to pick it up and suck on it.  It’s way more fun than watching TV and entertains our eldest boys for at least ten minutes which is pretty much a record for them.

Some common concerns some parents might have about BLW:

My baby will choke!!  Actually, babies have an amazing gag reflex.  They are unlikely to choke on a piece of food because of this but would I leave my baby by themselves with a piece of meat to munch on? No! Stay with your baby while they eat.

My baby is so skinny/ so chunky, they NEED lots of food!!  Virtually every organization around the world including the World Health Organization recommends exclusive breastfeeding (so breastmilk only) for the first six months. Some babies are chunky and others are skinny, just as adults are all different shapes and sizes (not only because some people eat fries and potato chips every day but because of genetics). Breastmilk has everything that a baby needs and has heaps more nutrients then a piece of fruit or rice cereal.

My baby is reaching for things off of my plate at four months so she is hungry!  If you put a piece of poop in front of your baby she will reach for it.  It’s not because she is hungry for poop it is because this is how she is learning about the world around her.

Signs of readiness for food are; your baby can sit up, your baby can reach for something and put it into their mouth and your baby does not automatically push the food back out with their tongue.

There is an excellent book about BLW, appropriately called, “Baby Led Weaning.”  It is written by Gill Rapley & Tracey Murkett.  I highly recommend it. 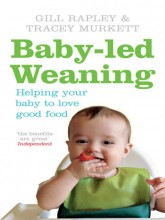 Yum yum!!  Now go get a piece of cooked Kangaroo and put it in front of your six month old.  It’s a fun little activity for your baby and entertaining to watch!

* OK- no joke this is what happened as I was writing this….I looked down and my baby had found a tomato from our garden on the floor. If this isn’t BLW then I don’t know what is* 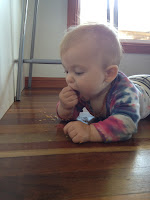 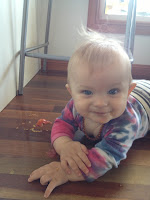 Check out my book! It has a 5 star rating on Amazon!