I did not look at my newborn baby boy and think, “wow! He is so cute I think I want to breastfeed him until he is three when he can eat a cracker, hold a cricket bat and breastfeed at the same time!”

Here is a picture of my middle boy at the age of 3 (ish) playing cricket.  And yes he was still breastfeeding! Play a little cricket, have a little snack…. 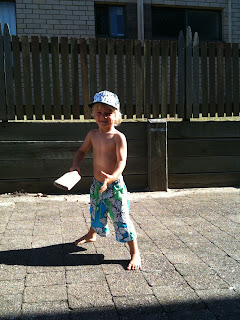 Breastfeeding to natural term (which often means into toddlerhood) just happens.  It happens for many reasons.  Some people consciously feel as though they want to feed their babies until they decide to stop.  For others it just happens without them even realizing it.  When you are breastfeeding a three year old they do not look like a huge three year old. To the breastfeeding mum they look little and cute.

“Boobie! Boobie!”  Many of us toddler breastfeeding mums know that some people cringe a bit when they hear our toddlers  gleefully yelling out “boobie!!”  We also see the stares and hear the occasional gasps when people also see them run up, lift our shirts up and then happily latch on while holding an apple in their little hands.  Although many people are shocked, it is actually very normal throughout much of the world for children to breastfeed into toddlerhood. We just don’t see it out in public much.  Mostly because toddlers get very distracted and do most of their breastfeeding at home. Many of them also LOVE to breastfeed at night.  Now here is one of the biggest challenges of toddler breastfeeding and a question I get often…how do I get my toddler to stop breastfeeding so much at night?! I need my boobs back!  When your toddler reaches the age of 18-24 months old they can really start to understand what you are saying and you can negotiate with them.  Here are some tips you might find helpful when breastfeeding a toddler…

1.  Remember that this is a relationship.  It is not only about your toddler and their needs. It is also about your needs and your own personal boundaries which might change over the months or years of your breastfeeding time together.  Let’s be honest, it’s not all fun and games breastfeeding a toddler!  At times it is wonderful, other times we want to throw the towel in and lock up our boobs.  Is there such a thing as a bra with padlocks?  Remind yourself that it’s not all about them.  It’s about you too.

2. It does not have to be “all or nothing” with breastfeeding.  Even though the word “WEAN” might be playing in our minds, it’s important to figure out what is making it hard for you.  If they are frequent night nursers then try to limit how often they feed at night.  If they breastfeed too often during the day then try some distracting tricks when they are awake.  You might find that you are happy to continue to breastfeed if you just drop a few of the feeds.

3.  If you have a partner available it might be time to get some help from them.  Partners are great for cuddling them and distracting them.  At night they can be helpful in trying to get them back to sleep instead of you feeding them back to sleep.

4. For the night time boobie monster:  it’s all about negotiating!  This is a skill that comes in handy when night weaning.  For my middle boy I would say, “no boobie until the sun comes up!”  He was old enough that he understood the sun and how there was dark and light.  It took a few weeks but he got it! At times he would wake up at 2am in the pitch darkness and say, “sun up?” My husband or I would explain that no, it is as dark as anything outside and he would go back to sleep.  Eventually he stopped doing that and would sleep through until the first tiny little ray of sunshine came through! It was like he had magical powers that could sense the light before it even appeared…

5.  Try the “counting” trick.  This involves telling your toddler that they can breastfeed until you count to ten (or twenty or thirty etc.) and then they have to stop.  This can work quite well for people who are happy to breastfeed but not for a half an hour.

6. Let your boobie toddler monster know that they can breastfeed to sleep but not if they are awake.  Of course you might fall into the same situation my friend did with this one.  Her son was almost weaned but still breastfed during the day once for his nap.  One day he came up to her to breastfeed and shook his head yes when she asked if he was ready for a nap.  She sat down with him.  He breastfed for one whole hour (awake!) hopped up afterwards and said, “all done!” and walk out of the room.  My friend said to me, “I have never felt so used by a man in my whole life!”  So although this didn’t work for her it does work for some!

7. Do not sit down where you normally breastfeed.  Sounds simple but works!  The second I sat down at the computer with my middle boy, he would hop up on my lap and want to breastfeed. By just avoiding that chair he would not breastfeed as often.

8. Offer a snack and a cuddle instead.  Sometimes this will work as it is a distraction.  Often times they are happy to receive attention through a hug or reading a book with a snack rather than breastfeed.

The most important thing to remember about these little boobie toddler mosters is that your patience is what will make it go as smoothly as possible.  Gentle weaning takes time and patience.  There will be one step forward and two steps back some days yet eventually they will wean.  You can meet the needs of your toddler and yourself, it just takes some creativity, patience and time.

For more information on gentle weaning, check out my BOOBinar (breastfeeding webinar) on this topic!

An open letter to mothers breastfeeding beyond babyhood…I support you.

An open letter to mothers breastfeeding beyond babyhood…I support you.

Nothing Compares To Boob! A Weaning Parody.

Nothing Compares To Boob! A Weaning Parody.

Welcome to The Milk Meg Shop For your convenience, I accept payment via Paypal. If you have any questions prior to purchasing, please email me at info@themilkmeg.com