There is This Thing Called "Exercise"…Breastfeeding and Exercise!

*I wrote this while breastfeeding my youngest of three boys…wanting to get back to shape but also  struggling with insane exhaustion. #motherhood

Today I did this thing called “exercise”.  I hate exercising.  Well that’s not entirely true. I like being active (sometimes) and occasionally I run or walk or do a few squats. Then I don’t walk for about three days because my muscles are as tight as rubber bands…and then the cycle starts again!

Before Kids (BK) I used to go to aerobics class. Remember this time in your life? When you could not only get to an organised class on time but you actually remembered your water bottle and found matching shoes. Oh yes, AND you shaved your legs before as well! Wow, those were the days. Now my exercise looks likes this…

1. Last minute rush to get my shoes, find my sports bra, cover my 3 day prickle legs and get the baby in some pants so he won’t freeze (or burn depending on the time of year) in his pram.

2. Decide… “How much energy do I have today? Did I actually sleep enough last night to go for a walk and be apart of society? Can I manage a short run? Will I actually survive an outing this morning? Will I fall asleep at the wheel on the way there?!”

3. Breastfeed my baby BEFORE tight uncomfortable sports bra goes on or I will be cutting of my circulation later while trying to feed him on the sidewalk.

4. Assess my babies’ happiness levels…”will he be happy for the whole thirty minutes? Will he need a snack? Will he need one or two extra nappies? Will he get bored? Do I have any toys for him? Where is his sippy cup?”

5. After we arrive at said walking location and I finally have the pram out of the car and baby strapped in, he cries. He is hungry of course and knows I am just on the brink of turning around and going home. He is testing me to see how far I can be pushed! Will she break??! Will she just give up and go home?!

6. Walk for thirty minutes. Until he cries to be fed again. Or cries out of boredom. Or cries because he would like to crawl around and be “unstrapped”.

7. Curse myself to attempting this thing called exercise again! Why oh why do I do this to myself?!

Today I managed to actually run. Yes run. It was OK. Now I will not be able to walk again for about four days. Then I’ll do something again. Maybe.  I have learned a few things though since exercising after kids (AK) as a breastfeeding mum…

1. Your baby will get to an age where you can leave them and go out by yourself for an hour to exercise! Or you might want to skip this all together and go sit at a café drinking coffee and eating a piece of cake instead.

2. Buy a TIGHT sports bra. If not you will have your nipples pointing in various directions (because once you begin breastfeeding your nipples become about one meter longer than BKs!

3. It is possible to combine exercising with your baby BUT…well just read the previous list for a few reasons why this might not be on the top of your “ways to exercise” list.

4. Do mum and baby yoga! Seriously this is such a great idea. Until your baby starts moving around. Then it’s just craziness with the added stress of trying to be relaxed and in the zone while secretly keeping one eye open to make sure your baby is not electrocuting themselves while exploring the powerpoint (which happens to be the only exciting thing in the room) or pulling the hair of the woman next to you in the downward dog position. 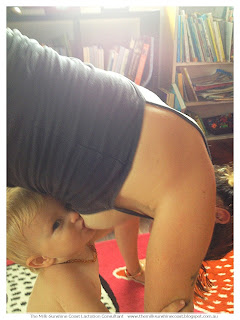 5. Instead of going to a yoga class just get down on your floor and do some stretches with your baby or toddler. My baby (and older kids) love when I get down on the floor. They gravitate towards me and my baby crawls all over me like I am a jungle gym.  When I go out to party (ha! by party I mean go to the grocery store) and leave my baby at home my husband will often just get down on the floor with him and hang out. He is happiest when we are down on his level so you might as well combine some yoga with baby entertainment!  Of course you might find yourself in this situation (see picture) where your breast happens to fall out of your shirt and your baby will take full advantage! Here I am attempting the downward dog…

6. DITCH THE CHAIRS AND COUCH. SIT ON THE FLOOR! I know, this sounds weird and random but you would not believe how just getting down and up off the floor strengthens your core and is great for your pelvic floor. Sitting on the floor aligns your pelvic floor just as it should be to encourage core strength and is great for your posture. Try this for a week and see what happens. Just sitting on the floor stretches you and strengthens you…and your baby will love it! Be ready to get your boob out though as often it spurs on a breastfeeding session.

Some common questions I have been asked about exercise when breastfeeding…

*First and foremost the important factor is how do you feel and what is your body telling you? If you exercise and you feel exhausted, depleted and dehydrated then slow down! Drink more water, exercise less frequently or do not exercise at such a high intensity level. If you are doing too much your body will tell you. About six weeks after I had my youngest I started to exercise again. I was lifting weights and basically doing WAY too much. My stomach muscles felt like they were being ripped apart! So I stopped. I changed it to walking and felt much better…

1. Will my baby get extra lactic acid in my milk after I exercise?

In another study the lactic acid levels did increase after exercise but there was no mention of it affecting the willingness of the babies taking the breast after.

2. Will my milk supply be affected if I exercise?

In short, no! Most women do not notice any changes in their milk supply after they start exercising again after birth. In the following study, they actually found that women who exercised had a higher milk volume than those who didn’t! I would venture to say that this is because they are most likely eating healthier (maybe? I exercised last night but then I had pizza so I am not supporting my own hypothesis) and their bodies would be more efficient at everything (including milk production) after exercise.

A study done by Lovelady CA, Lonnerdal B & Dewey KG (1990) found that, “Exercising women differed significantly from control subjects in maximum oxygen consumption, percent body fat, total energy expenditure, and energy intake. There was no difference between the groups in plasma hormones or milk energy, lipid, protein, or lactose content. Exercising subjects tended to have higher milk volume (839 vs 776 g/d) and energy output in milk (538 vs 494 kcal/d). Thus, there was no apparent adverse effect of vigorous exercise on lactation performance.”

3. Is it possible to exercise too much when breastfeeding?

This is where you must listen to your own body. If you feel great after exercise then do it again! If you feel extremely exhausted (in a bad way not a, “wow I’m so healthy and awesome” way) then slow down. Studies support that your milk production does not decrease, your milk composition does not change (or if there are changes it does not affect your babies willingness to breastfeed) and is healthier for the mum (of course)!

As breastfeeding mums we often do not take the time to do something for ourselves! Bring your baby if you can so you can breastfeed them when needed, or leave them with someone when they get old enough to be without you for an hour or so. Don’t put pressure on yourself either! If you are anything like me you are tired and sleep deprived and exercise is the last thing on your mind. Take care of yourself and don’t push yourself to the brink of insanity. Listen to your body. The time will come when you are up for some exercise…maybe. If not, just go out and get a coffee instead. 🙂

For more research on exercise and breastfeeding, head over to Kelly Mom’s section on this topic. There is a long list at the bottom of this page with research.

Check out my books! They have 5 star ratings on Amazon!